Three men are currently in police custody following a raid exercised this morning by ranks of Regional Police Division Number 6 attached to the Springlands Police Station.

The ranks commanded by a Sergeant acting on information received today about 03:30hrs conducted a raid exercise on the homes of four individuals.

During the raid exercise, they unearthed a 9mm semi-automatic pistol with one magazine and five live rounds, three camouflage shirts, two camouflage pants, one camouflage mask, one camouflage bag, two grey hoodies, and five smartphones in the home of a 28-year-old, unemployed male of Number 79 Village, Corentyne.

The items were lodged and the suspect is in custody assisting with the investigation.

Additionally, during the said exercise two unemployed males, 18-year-old and 32-year-old of Dukestown and #79 Village were arrested for questioning in connection with Robbery Under Arms. 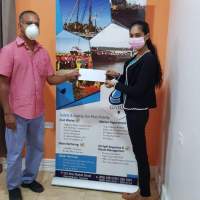