A 72-year-old Venezuelan has reportedly lost his life while trying to untangle a boat propeller that was entangled with a seine.

According to a release, the incident involving Daniel Enrique Medina, a labourer residing at Gumanaj, Venezuela, took place yesterday
about 09:30 hours at Morawhanna, North West District.

Enquiries disclosed that Daniel Enrique Medina and his 42-year-old son, a Captain were traveling in a 22-feet metal boat.

It was reported that during the journey, the boat’s propeller got entangled with a seine and on the said date about 09:00hrs Daniel Enrique Medina volunteered to untangle the propeller and plunged into the river to free the propeller.

The elderly man reportedly went down but never resurfaced.
The matter was reported to the police on the said date at about 11:00hrs at the Morawhanna Police Station.
Investigations into the matter are currently ongoing. 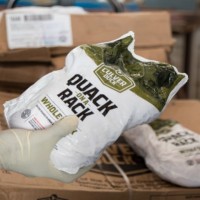