Guyana and the United States of America will be teaming up to bring an end to the local drug trade. The two countries on Friday morning signed a bilateral agreement which will see more cooperation between law enforcement.

The initiative which will commence next week, will allow law enforcement officials to embark on vessels and aircraft of the U.S. Coast Guard and U.S. Navy, where authorized by the agreements.

It will also allow authorized U.S. vessels and aircraft to assist host country law enforcement officials with maritime surveillance and boarding vessels under the official’s authority and jurisdiction.

The agreement is executed by U.S. Coast Guard vessels, aircraft, and maritime law enforcement officials; however, U.S. Navy, host nation, and third-party government vessels and aircraft participate as well, where authorized in the agreements. 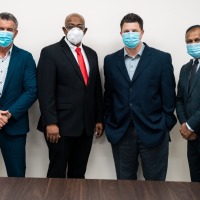 2182 Layou Street
Georgetown Guyana
+592-6177547
thegyledger@gmail.com
GUYANA AND US AIM TO STAMP OUT DRUG TRADE WITH “SHIPRIDER AGREEMENT”
<span>%d</span> bloggers like this: